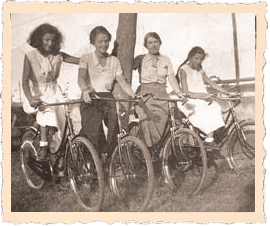 The sisters Mynna, Ylda and Yana Cini,
with the housekeeper, in Monselice
(photo from Monselice in the Second World War)

Together with her twin sister Ylda, Yana was the youngest daughter of Count Vittorio Cini (one of the greatest Italian entrepreneurs of the early twentieth century, as well as a patron, collector and promotor of diverse initiatives in the areas of economics, culture and the arts) and Lyda Borelli (the great theatre actress and star of the early Italian silent screen).
Ylda and Yana were born (8 January 1924) in the Venetian house of Campo San Vio on the Grand Canal.
Their baptism was held on 6 July 1924 at Monselice.
Thus the Cini girls spent their childhood and youth between Venice, Monselice and the villa overlooking Montericco.

As was the custom in well-to-do families of the time, the girls’ schooling up through highschool occurred at home with the aid of tutors and private instructors. They were especially well-educated in foreign languages, and were always instructed by native speakers. Yana was fluent in both spoken and written French and English, and her knowledge of German and Spanish was advanced.

While still a child, Yana was stricken was poliomyelitis. These periods of suffering and forced immobility were an opportunity for reading, cultural growth as well as the development of an acute sensitivity to suffering.

Her interests spanned all areas including Italian and foreign literature (read, when possible, in the original language), Western and Eastern philosophy, social studies, religion, art, archeology, architecture and design. This voracious interest for all things cultural is testified by the proliferation of books and journals in both the houses in Rome and in Venice.

During those same early years, Yana developed a deep friendship with the great painter Emilio Vedova and his wife Anna-bianca, who inducted her into the “mysteries” of modern art, a passion which she long cultivated. 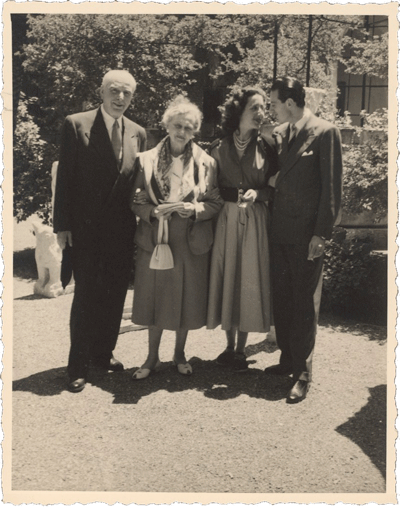 Yana married Prince Fabrizio Alliata of Montereale on 16 February 1953 in Venice and moved to Rome, where their five children (Giovanni, Vittorio, Domizia, Giorgio and Paolo) were born. But she always remained attached to her native city, returning several times a year to her father’s house and keeping up with the Cini Foundation’s events and undertakings.

She was very athletic and enjoyed skiing, swimming and deep-sea diving. She was also interested in photography, theatre and classical music, and assiduously attended concerts and plays with her children. Yana loved traveling, and, pursuing her passion for archaeology, history and foreign cultures, visited numerous countries in the Middle and Far East as well as South America, bringing back photographic and filmed reportages. 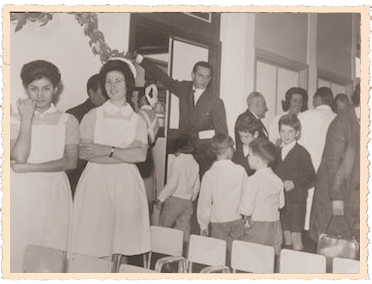 In 1961 Yana founded the “Nido Verde” in Rome for the care and re-education of poliomyelitic children. It was through this initiative that she met and became friends with Albert Sabin, the man who discovered the oral vaccine against poliomyelitics, thanks to whom the disease has been eradicated. It was upon his suggestion that in 1969 Yana and Fabrizio promoted the formation of the AIL (Italian Association against Lukemia).

In 1971 Yan was operated for a thymoma – a benign tumor in the mediastinum – but the consequences of the operation afflicted her up until her death.

Yana decided to donate a considerable portion of her inheritance to the Foundation, including the family home in the two piani nobili of the Palazzo at San Vio, as well as the collections of Tuscan paintings and objets d’art.
The opening of the Gallery of Palazzo Cini took place on 21 September 1984 by Federico Zeri, who curated and mounted the exhibition.

Yana died in Rome on 5 April 1989. She is buried in the family vault at Certosa di Ferrara next to her father, mother, brother Giorgio and from october 2017 her husband Fabrizio.